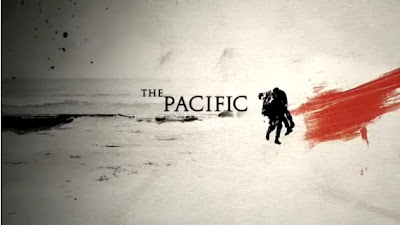 Tom Hanks, Steven Spielberg, and Gary Goetzman present HBO's new ten-hour miniseries, The Pacific.
It tells the intertwined stories of three Marines, Robert Leckie (played by James Badge Dale), Eugene Sledge (Joe Mazzello) and John Basilone (Jon Seda), during America’s battle with the Japanese in the Pacific during World War II.
From the creators of Band of Brothers, I have high hopes for this one. I can't wait! It will premiere in 2010.

Check out the trailer here!
Posted by Little Plastic Man at 11:25 PM

Cool! I'm having high anticipations for this one too bro! Its good to have an insight on the PTO's side of WW2.....

Rebel - Yeah man! I am excited!